Epigenetics in intestinal health and disease: 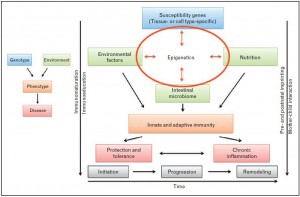 Model IBD pathogenesis in which epigenetics plays a central role in mediating effects of the key cornerstones: genetic predisposition, environmental factors, nutrition and the intestinal microbiome (Jenke and Zilbauer, 2013). 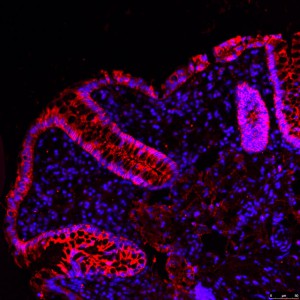 Over the last 5 decades we have seen a dramatic increase in the incidence of several immune mediated conditions, including IBD. This increase has been particularly prominent in the western world. However, interestingly, many developing countries that are adapting to a “western” life style are now also reporting a rapid increase in patients diagnosed with IBD. In the absence of much evidence for changes to the human genome in the same short time, we hypothesise that changes in our environment are key drivers of complex disease development.

Epigenetic mechanisms provide the interface between the genome and the environment, translating the effects of environmental change into a change in phenotype. Specifically, epigenetics can be defined as changes in phenotype, i.e. gene expression, caused by mechanisms other than changes in the underlying DNA sequence. The main epigenetic mechanisms known to be operative in humans include post-transcriptional histone modification, expression of non-coding RNAs (e.g. siRNA, miRNA) and DNA methylation. The latter is amongst the most extensively studied and has been shown to be implicated in several fundamental biological processes, e.g. genomic imprinting, X-chromosome inactivation and regulating cell type specific gene expression/cellular function. One of the key research areas in our group is to investigate the role of epigenetic mechanisms, particularly DNA methylation, in intestinal health and IBD in particular.